Kafka in Palestine: Settlers Build On His Land & Serve Him A Tax Bill

It’s rarely fair for non-Jewish people living under Israeli occupation, especially in Hebron, the largest city in the West Bank, where the movements of a quarter of a million Palestinians are severely circumscribed by the Israeli army, who are stationed in the city to safeguard a few hundred far-right Jewish settlers.

But the fate that has befallen one Palestinian resident of Hebron is so absurdly unfair that it verges on the Kafkaesque.

In January 2015, Abed Al-Karim Al-Ja’abari was surprised to receive a bill for property taxes for a sum of more than $22,000 from the town council of the Jewish-only settlement of Kiryat Arba. The bill pertained to a 1.7 acre plot of land next to Kiryat Arba which Al-Ja’abari owns, and which a group of settlers illegally occupied and built upon. 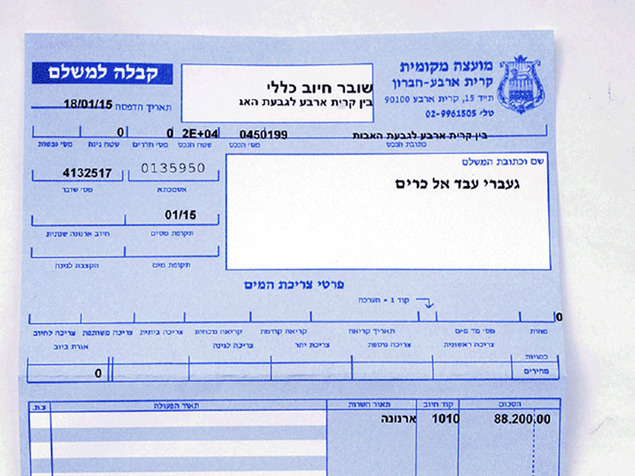 The saga stretches back to 2001, when Jewish settlers illegally built a 500-plus-square-foot synagogue on part of Al-Ja’abari’s property, according to the Israeli news site Walla. Over the years, Al-Ja’abari submitted several legal appeals, but despite several court orders to stop construction, the synagogue stood at over 1000 square feet in size by 2003.

The court ordered the government not to connect the synagogue to services such as water, sewage and electricity. But the state claimed in response that responsibility for demolishing the structure lay with the person who built it. Though the court proceedings revealed that a member of the town council himself works in the synagogue and actively raises funds for it, the state claims that the identity of the person who built the structure is unknown.

Now the town council has sent Al-Ja’abari a property tax bill for over $22,000, warning him that if he does not pay the amount forthwith, he will be fined and that the property may be seized. Without any sense of irony, the bill concludes with the notice that “This document does not constitute acknowledgement of [your] ownership of the property”.

Al-Ja’abari told Walla that he received the land as an inheritance from his late grandfather, and that when he approaches it, the settlers pelt him with stones.