MLK Day Reminder: Feds Tried To Get Martin To Off Himself 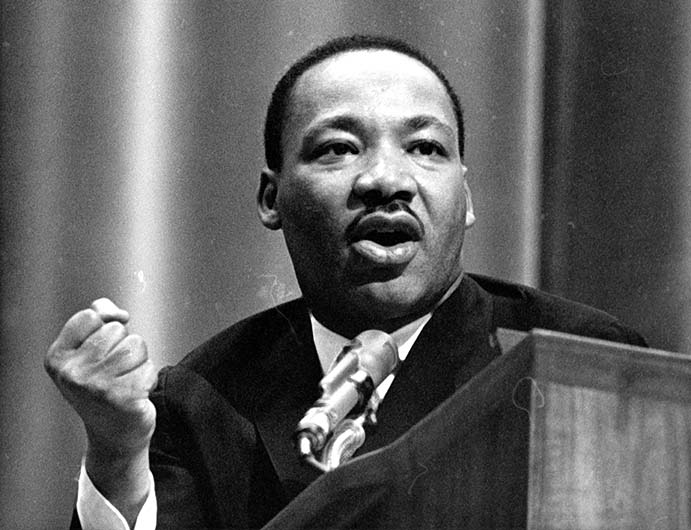 As the United States experiences a resurgence in anti-racist activism following a string of highly-publicized killings of African Americans by law enforcement officers, political forces that benefit from the presiding system of white supremacy are making efforts of their own to stifle the nascent movement in its tracks. One of the strategies that these reactionary forces have resorted to in their attempt to quell increasing unrest over state-sponsored racism is attacking the character of anti-racist activists.

It is instructive to recall that this strategy is not a new one, and was employed by the United States Government half a century ago against the social, civil and human rights advocate Rev. Dr. Martin Luther King Jr. In its efforts to quash King’s political program, the Federal Bureau of Investigations resorted to spying on King in his bedroom and even twentieth-century-trolling him: sending King an anonymous letter that accused him of moral depravity and suggested he should commit suicide to save himself the shame.

The letter was originally delivered to King, accompanied by an audio file that featured spliced-together snippets of recordings of his secret extramarital sexual liasons. The author of the letter calls King “immoral”, “evil” and “filth” on account of these [presumably consensual] sexual relationships, and warns him that if he does not take the “one way out” – the implication being that he should kill himself – the author will make the tapes public and destroy King’s political career.

American sexual mores have shifted significantly since the early 1960’s, and it is unclear if threatening to expose the details of a progressive activist’s non-hetero-normative sex life would have the same political chilling effect that it must have a half-century ago. Nevertheless, as activists inspired by King’s words and deeds struggle to combat institutional racism in America today, they would do well to be wary and watchful, and recall the contemptible depths that their political opponents are willing to plumb in order to discredit the forces fighting for justice and equality. 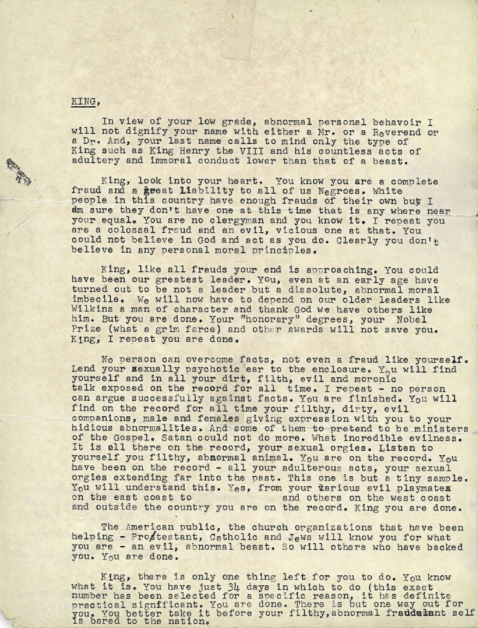 In view of your low grade, abnormal personal behavoir [sic] I will not dignify your name with either a Mr. or a Reverend or a Dr. And, your last name calls to mind only the type of King such as King Henry the VIII and his countless acts of adultery and immoral conduct lower than that of a beast.

King, look into your heart. You know you are a complete fraud and a great liability to all of us Negroes. White people in this country have enough frauds of their own but I am sure they don’t have one at this time anywhere near your equal. You are no clergyman and you know it. I repeat you are a colossal fraud and an evil, vicious one at that. You could not believe in God and act as you do. Clearly you don’t believe in any personal moral principles.

King, like all frauds your end is approaching. You could have been our greatest leader. You, even at an early age have turned out to be not a leader but a dissolute, abnormal moral imbecile. We will now have to depend on our older leaders like Wilkins, a man of character and thank God we have others like him. But you are done. Your “honorary” degrees, your Nobel Prize (what a grim farce) and other awards will not save you. King, I repeat you are done.

The American public, the church organizations that have been helping — Protestant, Catholic and Jews will know you for what you are — an evil, abnormal beast. So will others who have backed you. You are done.

King, there is only one thing left for you to do. You know what it is. You have just 34 days in which to do it (this exact number has been selected for a specific reason, it has definite practical significant [sic]). You are done. There is but one way out for you. You better take it before your filthy, abnormal fraudulent self is bared to the nation.