Pie In Your Face 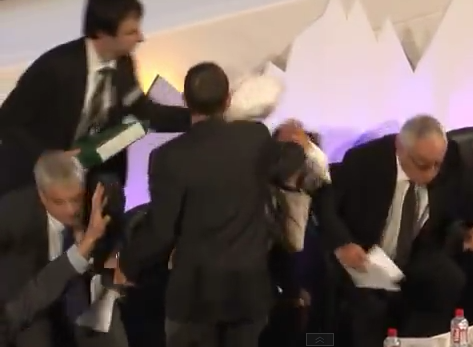 A group of Spanish environmental activists have become the first people in the world to be incarcerated for the crime of pie-throwing, the Basque Vasco Press reported. The four, who walked up to a Spanish politician and covered her face in custard, have been sentenced to two years and three months in jail, while one of the four had an extra year tacked on to his sentence.

The activists accosted Yolanda Barcina Angulo, Governor of the Navarre region of northeastern Spain, as she participated in a public panel in Toulouse, France on October 27, 2011. The four casually walked up to Barcina Angulo wearing business suits, presumably to allay suspicions as to their true intentions, and squished the pies into her face.

As the cream dripped off of Barcina Angulo’s face, the pie-bucklers remained on the dais and raised signs expressing their indignation at upcoming plans to build a network of high-speed trains in Spain, which they believe will cause ecological damage to forests in the Pyrenees mountains that straddle the border between Spain and France.

Although it was the first decision of its kind, the jail sentence for pie-throwing was still much lighter than it could have been. The maximum sentence that the perpetrators could have potentially received is 27 years in jail. They activists also face fines for their actions.

A lawyer for the defendants protested the sentence, noting that the presiding judge refused to listen to the testimony of defense witnesses, and only accepted testimony from two Spanish police officers who were not even present when the incident occurred.

“This case reveals the very worst side of the Spanish judicial system and its total lack of contact with reality. It shows a corrupt judicial and political class prepared to use public resources to try people that have done nothing more than demonstrate their opposition to the destruction of the forest,” the lawyer said, according to The Guardian.