Experiment: Will Britons Stand Up For Poor People? 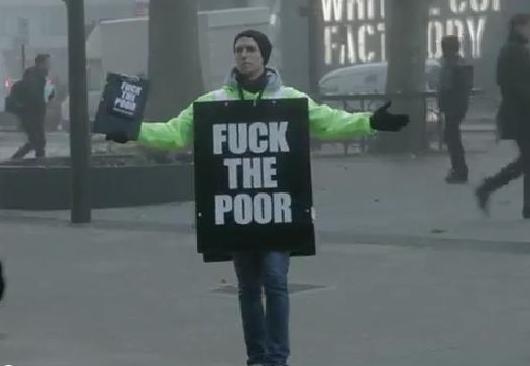 A social experiment conducted by a London-based aid organization for poor people endeavored to find out if British people actually care for those less fortunate than them. To provoke passersby, a man wearing a sign that said “Fuck the Poor” stood on a busy street and handed out flyers for a campaign of the same name. The responses he received – or at least those captured on video – were overwhelmingly negative.

After a time, however, the activist-actor flipped the sign over to reveal a very different message: “Help the Poor”. He then held out a cup and asked Londoners to donate funds to the cause. What kind of response do you think he received then? Watch the video below to find out.

“We understand that certain people are likely to be repulsed by the video documenting the social experiment we conducted, but we are repulsed even more that people throughout the United Kingdom live in humiliating poverty,” said British aid organization Pillon Trust, who were responsible for the video.

Tags: height of hypocrisy, homelessness, London, United Kingdom, war on the poor, what would you do

Burn down the Debt: broke Into the University’s Offices and Burned $500 Million of Students Debt Records
Andrea Germanos | Common Dreams

Queer & Legal in the Lands of Islam
Islam and Homosexuality