After Elhanan Esterovitch, a young ultra-Orthodox resident of Jerusalem, was charged with spraying anti-Zionist graffiti at Yad Vashem, Israel’s national Holocaust Museum in June 2012, he wrote an 8-page letter from his jail cell in the Russian Compound prison. Below are some of the letter’s highlights. 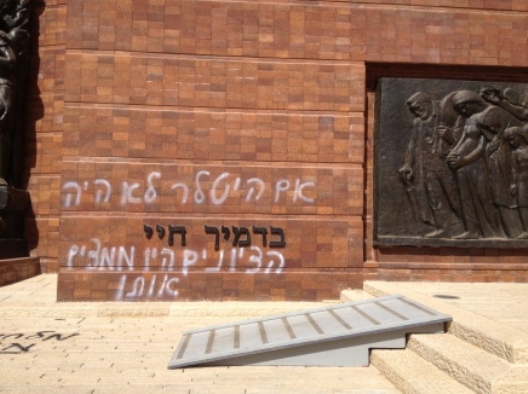 At the main entrance of Yad Vashem stands a memorial to the Warsaw Ghetto uprising. There are no cameras in the area, I verified this on previous visits. There is only a single camera that guards the entrance to the museum complex, and it is not aimed at the memorial, it won’t stand in my way.

I arrive at the memorial that symbolizes “bravery” during the Holocaust. The same “bravery” that was instantly stamped out by all of the ghetto’s denizens. Rabbis in the ghetto opposed the uprising, they feared what would result. What did the rebels care? Ha. It doesn’t interest the heads of ‘Yad Vashem’ today, either. Next to the memorial, there is no mention of the rabbis’ opposition to the uprising. Selective memory at its finest. ‘Yad Vashem’ does not want to recall the rabbis, it doesn’t want to interfere with the ‘bravery’. It is good to die for the sake of our country, it is good to die for bravery’s sake.

This is what happens when you replace the Torah with nationalism. You die for the sake of ‘bravery’, for the ‘state’, you put six million Jews at risk of war, you prepare atomic bomb shelters and safe spaces, a desert ‘resort hotel’ for the residents of the Tel Aviv region. But on the day that the Arabs are destined to be victorious, even a thousand German Dolphin class submarines and a thousand F-16 aircraft and satellites won’t help. Monstrous separation barriers, roadblocks and border police patrols, a permanent state of emergency, security guards everywhere.

The Western Wall has been sterilized, the gravesite of our matriarch Rachel has been turned into a frightening army compound that you need permits in order to access. For heaven’s sake, what have we become in the name of ‘bravery’? Maybe you should take your ‘bravery’, your Dolphin submarine, your jets and your tanks, and just go somewhere else – maybe Uganda – there you can ‘protect’ the Ugandans as much as you want, build them ‘Iron Domes’ and nuclear plants, just let us live in peace and quiet with the Palestinians. They have a pleasantly colorful flag and a lovely anthem that isn’t depressing like the gloomy ‘HaTikvah’, which was authored in the dark torture chamber of some cruel Eastern European regime that hasn’t even existed for years, no doubt.

Palestinians also have tasty coffee, olive trees, pita bread, sheep, goats, colorful markets and inexpensive stores, where you don’t pay with credit cards or fake-ass club cards, where there is an abundance of straightforwardness and warmth that are nonexistent in the ‘brave’ steely Zion, which worships the lie of physical attraction and the nonsense of physical beauty. The Palestinians also lack the horrific Bolshevik siren that is sounded four times a year, forcing all citizens to stand at attention in fear and ‘bond with the victims’, as if we live in Stalin’s Soviet Union. 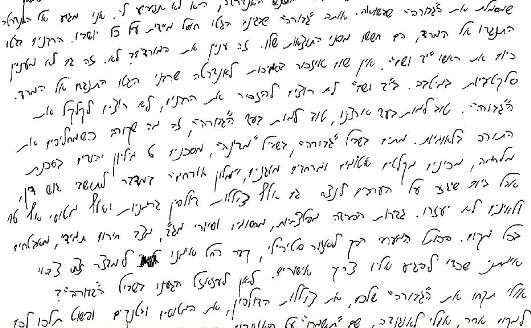 The Palestinians complain of refugee camps, but even today in the year 2012, you can find in Be’er Sheva, Dimona, Ramle, Jerusalem, Netanya, and everywhere else, refugee camps for the Middle Eastern Jews – ‘Yahud al’Arab’ – run-down slums inhabited by an impoverished population who were easy prey for the devious emissaries of the Jewish Agency that impersonated religious Jews and promised them a field of dreams in the Land of Israel. In the Land of Israel what awaited them was the totalitarian and racist Labor party regime which forced them to vote for it in order to receive food stamps and jobs, and directed them to the military ‘melting pot’, which succeeded in disconnecting them from whatever remained of their noble past.

The miserable Middle Eastern Jews weren’t left with many options. After years of discrimination, they tried to find an outlet in the Likud party, and later through the Shas party, but in the end, only a few, like Reuven Avergil of the Israeli Black Panthers, realized that efforts to improve their lives must not be directed at the Knesset and the Zionist regime that ruined the Jewish peoples of the Middle East, but towards the restitution of the naturally occurring coexistence which existed between themselves and the Arabs, before the Zionist-Arab conflict erupted and made casualties of them, as well. 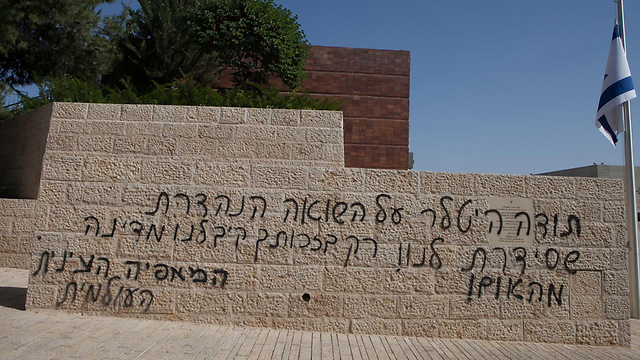 “If Hitler had never existed, the Zionists would have invented him”

To remain relevant, the Zionists require an indefinite supply of enemies to battle. To Zionism and the State of Israel, anti-semitism is an intravenous infusion. And what do they do when there is no anti-semitism? Very simple: they create it. For example, the bombs that Zionist activists used to plant in Jewish neighborhoods in Arabs lands in order to create panic.

On the memorial, I am spraying in white, ‘If Hitler had never existed, the Zionists would have invented him’. I ran out of space, so I misspelled it. They said that it was a spelling mistake. Whatever.

The Zionists always need a Hitler on standby, close at hand. With great effort, they actually achieved this, a real Hitler, German-made, just like their Merkava tanks. Later on they replaced him with a succession of Arab leaders, and today it is Ahmadinejad. Of course there are the smaller regional ‘Hitlers’, like Sheikh Nasrallah, the Palestinian resistance groups, or the Turkish President Erdogan. I wonder why everyone hates innocent little Israel, which after all is only defending itself. I really wonder. 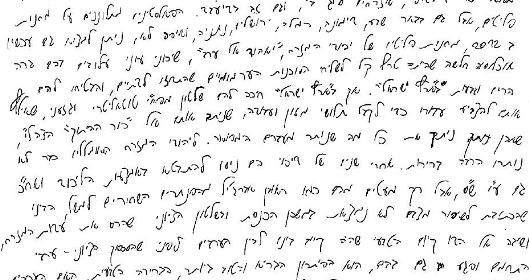 “Damn Zionists, get your hands off of the Jewish people!”

Very shortly I will get to the fearsome ‘traincar memorial’ that was created so that we will remember and never forget why we need a state. A wooden cattle car was brought to Israel directly from Germany and installed in order to obsessively remind us what happened there when we didn’t have a state. A righteous man, Rabbi Michael Dov Weissmandl, wept so hard in an attempt to stop those wooden traincars; in fact, he actually managed to stop them for some time, but for all of his efforts, the answer he received in the end from the Zionists was quite clear: “Only with blood will we have the land” – in other words, we aren’t interested in saving lives.

Two million Hungarian Jews (most of whom were either non-Zionists or anti-Zionists) only wanted to live, but the Zionist leaders in the Land of Israel had other plans for them. If you don’t come to Palestine, then go to Auschwitz. Just don’t interfere with the Zionist plans. And you blameless Hungarian Jews, don’t you worry either, later on we will commemorate you at ‘Yad Vashem’, we’ll hold moving memorial ceremonies for you at Auschwitz, loud ‘Marches of the Living’, and as for Rabbi Weissmandl, biased ‘historians’ will cast him as untrustworthy. Incidentally, at ‘Yad Vashem’ there will be no record of him at all.

But now, with the spray paint in my hand, I will call out what you at ‘Yad Vashem’ try so hard to forget and sweep under the rug. Rabbi Weissmandl, and with him two million Hungarian Jews, walked with me that night – did I speak for them?

“I did not mean to insult their memory”

I did not mean to insult the memory of the martyrs. I did not mean to insult the survivors who are still with us. I meant to protest against those that make capital from the catastrophe that was visited upon our people, because of their irrepressible ambition to rule, at any price, come what may. I intended to protest against the selective museum that they established in order to preserve their rule, and they despicably and disgustingly contend that this catastrophe was visited upon our people because they [Zionists] did not exist. But the truth is, it is because that they did exist that this catastrophe took place, and “thanks” to them, six million Jews were butchered and burned by the Nazis and their collaborators.

During the years of rage, self-appointed leaders arose among the Jewish people and decided to take on for themselves a country and rule it. Even now, they have no idea what other catastrophes they will bring upon us in the future. So I am sincerely sorry for all those who were offended, I deeply apologize, but that was not my intention. I am not a Holocaust-denier, I myself am the descendent of Holocaust survivors, the entire family of one of my grandparents was killed in that bitter tragedy. Many of my family members from Vilna in Lithuania were also killed. But do I regret the graffiti that I sprayed and the purpose of my protest? No, no, and again, NO! In summary, remembering the Holocaust – yes; selective memorials for political purposes – no way.

First light of day, the beeping sounds of a truck reversing are heard at the entrance to ‘Yad Vashem’. It’s probably a supplier making a delivery to the museum. I don’t have a lot of time, I have to start gathering my things. I have begun to return via the ‘Jerusalem Forest’ in the direction of Givat Shaul, two cute foxes are playing amongst the trees, I stand for a moment and just enjoy watching them, until they disappear, and then I disappear, as well.