Optimism for the Masses

Berlin Hangs Its Head, Then Covers It

During the summer of 2012, Rabbi Daniel Alter was walking down the streets of Berlin with his six-year-old daughter when he was approached by four youths who asked him if he was a Jew. The rabbi, who was wearing a skullcap, answered in the affirmative, and in response the youths blocked his path, punched him in the face and threatened his daughter. Following the attack, the German capital saw a wave of anti-racist protests in which Berliners who were not Jews themselves donned skullcaps, or kipot. Some protests took the form of flash mobs, while in other cases famous persons were photographed wearing the head coverings in public. 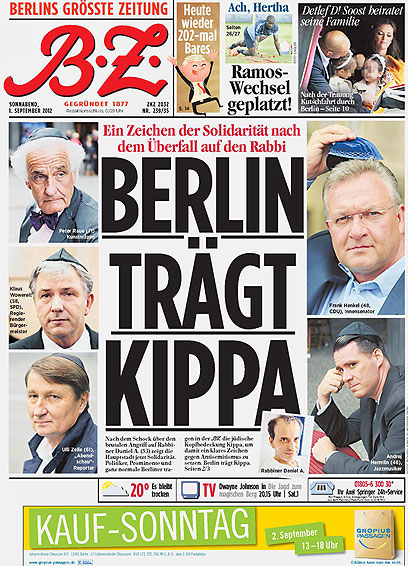 Danny Keefe was a first grade student in Massachusetts that was being bullied at school because of his speech impediment resulting from a brain hemorrhage at the time of his birth, and because of his idiosyncratic choice to wear a suit and tie to school every day. Keefe was also the waterboy of the school’s fifth grade football team, and when the team’s quarterback, Tommy Cooney, learned that the boy was being picked on, he decided to wear a suit and tie to school, as well, in an act of solidarity. “He’s such a good person. He doesn’t let the bullying bother him, he just goes on about his business. He’s a six-year-old kid, and we all need to respect him,” said Cooney, whose teammates also participated in the initiative. In the end, more than 40 students came to school on November 20, 2013 wearing suits and ties in support of Keefe. 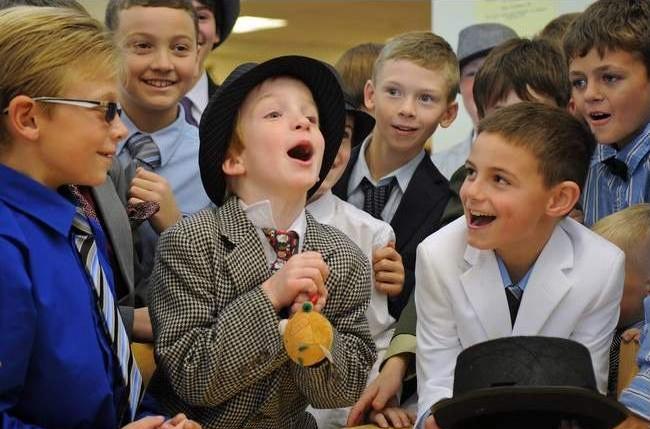 The Rabbi Who Called Out “Allahu Akbar!”

In September 2011, Jewish settlers torched a mosque in the Palestinian village of Qusra and graffiti’d “Muhammed is a pig” on its outer walls. In response, Menachem Froman, then the chief rabbi of the Jewish settlement of Tekoa, visited the scene of the crime, and began to loudly chant the slogan of Muslim believers, “Allahu Akbar!” which means ‘God is great’. The residents of the village joined his refrain. 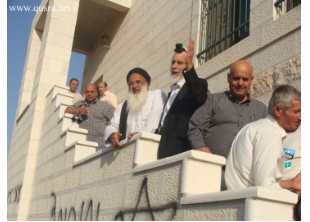 “Menachem used to say that the most accurate translation of ‘Allahu Akbar’ is ‘Peace will be victorious’. That is the word-for-word translation. ‘Peace’ is the name of God, for both Muslims and Jews. ‘Akbar’ means ‘greatest’ or ‘will overcome,’” said Hadassah Froman, the rabbi’s wife. “That is love, the piercing vision of the concept of ‘peace’. Peace exists, it lays at the root of our very existence, and it will be victorious.”

Two years later, in January 2014, 11 masked Jewish settlers entered the same village of Qusra with the intention of carrying out a racist attack. The settlers attacked a local youth, wounding him in the head, but were soon surprised by a force of 30 villagers who surrounded them and began to beat them. The settlers were not carrying mobile phones, so that they could not be traced by security forces, and for this reason they were also unable to call for help. They fled into an empty house, which was quickly surrounded by Palestinians who wanted to exact revenge upon them. The incident could easily have ended in a lynch, but a group of Palestinian human rights activists defended the settlers with their very bodies until the Israeli army arrived and extracted them. 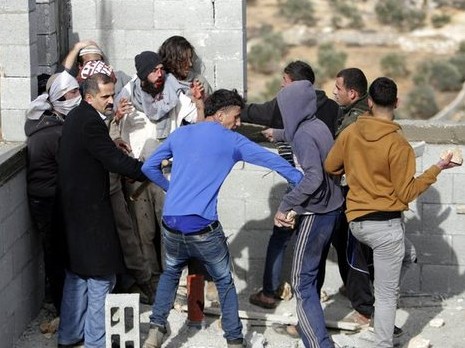 A woman in advances stages of pregnancy was attacked in August 2013 on the streets of Stockholm, in Sweden, just because she was wearing a hijab, a Muslim head covering. Her attacker cursed her with racist epithets, ripped off her hijab, and banged her head into a vehicle until she passed out. While she lay unconscious in hospital, women all over Sweden began to photograph themselves wearing the hijab and uploading the images to the internet. 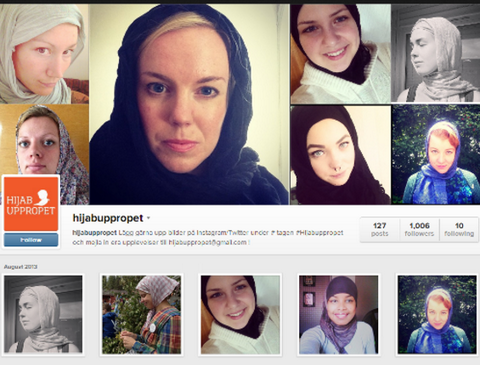 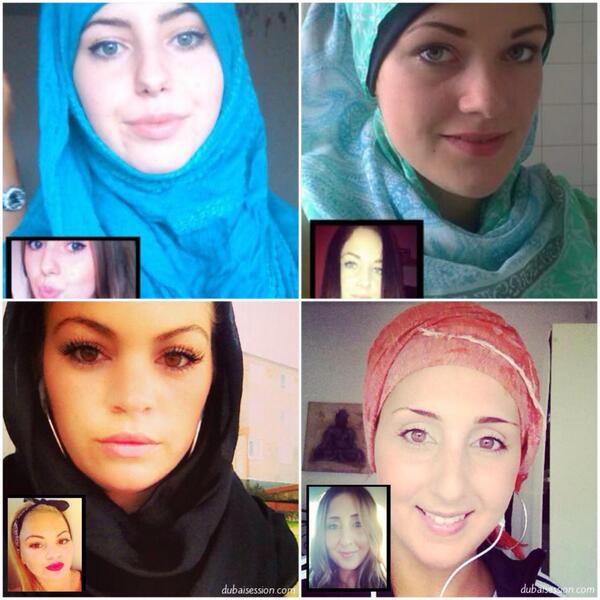 Adnan al-Afandi, a 21-year-old Palestinian from the Daheisha refugee camp stabbed two Jewish youths at a Jerusalem market in May 1992. An angry mob of Israelis quickly formed and caught up with him in the nearby parking lot. With al-Afandi laid out on the ground, the crowd badly beat him and it looked like they would pummel him to death. An ultra-Orthodox woman named Bella Freund, who just happened by, decided to intervene. She managed to slip through the crown and reach al-Afandi, covering him with her own body. The Israelis who sought to take the law into their own hands yelled at her, “Arab-lover!”, beating and kicking her. One of them even burned her skin with a lit cigarette. Eventually, after 27 minutes, police arrived on the scene and arrest al-Afandi. “At that instant, it was a Mount Sinai moment for me. Not one drop of blood was spilled there, and that is what is important,” Freund, the daughter of Holocaust survivors, explained.

During the summer of 2013, at the conclusion of a church service in the Pakistani city of Peshawar, two Muslim suicide bombers set off explosives at the entrance of the prayer hall, killing over 100 Christian worshippers. In the weeks that followed, among the most difficult for Christians in Pakistani history, hundreds of Muslims came to the church and encompassed it, creating a human defensive barrier, in order to protect those praying inside. 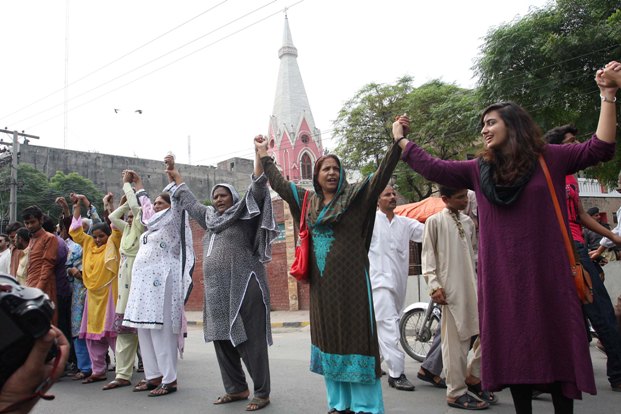 On Christmas Day in 1914, when World War One was raging across Europe, a spontaneous truce broke out between the armies of Germany and the United Kingdom, despite opposition from the commanding officers of both sides. The ceasefire began on Christmas Eve when German soldiers began to decorate their bunkers on a battlefield in Belgium. The soldiers placed candles on trees and sung Christmas songs to celebrate the holiday. The British soldiers, who had hunkered down opposite the German troops, responded with their own Christmas songs in English. 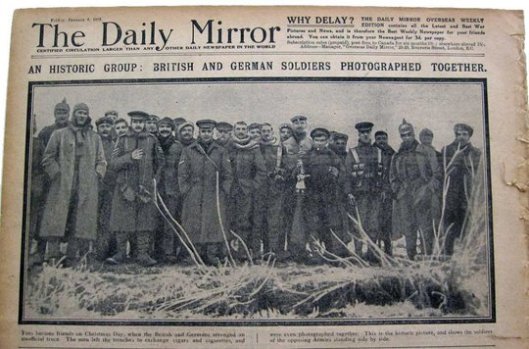 After the two warring sides shouted Merry Christmas at each other across the divide, soldiers emerged from their trenches and met in the middle on No Man’s Land, exchanging Christmas gifts consisting of cigarettes and alcoholic drinks. No artillery shells were launched on that night. The ceasefire allowed the two sides to collect their fallen comrades and give them proper burials. At some locations, the warring sides even held joint funeral services. The ceasefire spread to other areas and in some regions, the armies even played friendly matches of football. In most places, the ceasefire lasted until the end of the Christmas holiday, but in some areas it continued for a full week, until New Year’s Day.

After Twofer Dabashi, a young Kurd from the city of Marivan, Iran, was convicted in April 2013 of causing a public disturbance, the court ordered the police to drive him around town while he wears traditional Kurdish clothing for women, aiming to humiliate him and deter other potential lawbreakers. But the punishment had the exact opposite effect that the court had hoped for, because residents of the town saw the decision as an insult to women and to Kurdish culture. “To look like a woman is not a way to humiliate or punish anyone. This is what we look like, this is our culture,” read a message on the Facebook page of a protest group called “Kurdish Men For Equality”, where men posted photos of themselves wearing traditional Kurdish outfits for females. 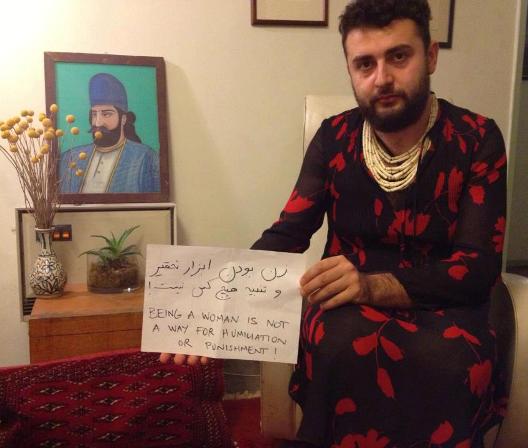 All You Need Is Love

The American pastor Terry Jones, known for burning copies of the Quran outside his Florida church, travelled to New York City on September 11, the anniversary of the 2001 terrorist attacks on the World Trade Center, as part of his campaign to promote hatred of Islam and its adherents. But the spontaneous reception that Jones received from New Yorkers surprised him.