The German town of Wunsiedel is primarily known as the location of the grave of Adolf Hitler’s deputy Rudolf Hess, and it has become a pilgrimage site for neo-Nazis all over Europe.

The town’s residents, who number about a thousand, have tried for years to prevent the annual march of thousands of neo-Nazis to Hess’ gravesite. The townsfolk have tried to hold counter-rallies, they have appealed to the courts, and they have founded associations to promote tolerance – but all to no avail. The parades continued, and thousands of neo-Nazis continue to visit Wunsiedel every year, even after Hess’ grave was destroyed and his bones disinterred, burned and scattered over a lake whose name remains a secret.

This year, however, the town’s residents decided to prepare a small surprise for the demonstrators: they turned the neo-Nazi parade into an anti-racist fundraiser.  The neo-Nazis who arrived at Wunsiedel on November 15, 2014 were shocked to see the town’s residents receive them with great cheer, confetti and colorful signs which informed them that with every meter they march, the town will donate 10 euros to Exit Deutschland, a group that aids people who choose to leave neo-Nazi groups.

Over the course of the parade route, every few meters were marked by a painted message that informed marchers of the amount of money that would be raised by that point and thanked them for their participation. Town residents even offered the neo-Nazi marchers refreshments.

“This is the largest involuntary fundraising parade in German history,” the townsfolk announced after they succeeded in raising 10,000 euros. “For the first time in history, neo-Nazis marched against neo-Nazism.”

“It’s very unlikely that they will stop coming. The town’s history is too important for them, but at least something good came out of it,” said Fabian Wichmann of Exit Deutschland.

This was not the first time that Exit Deutschland took part in a ruse to make fools of neo-Nazis. In the summer of 2011, revelers at a neo-Nazi rock festival in Germany received free black T-shirts featuring images of skulls and crossbones and nationalistic slogans. But after leaving the festival and washing their shirts in the laundry, the skinheads were surprised to find that the original images and slogans had faded in the wash, and what remained was a very different message: “If your shirt can change, so can you. We’ll help you leave the far right”. 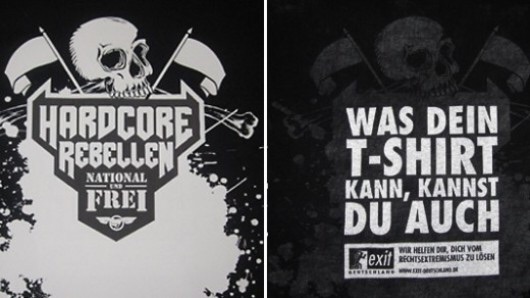