Will Your City Soon Be Policed By Drones? 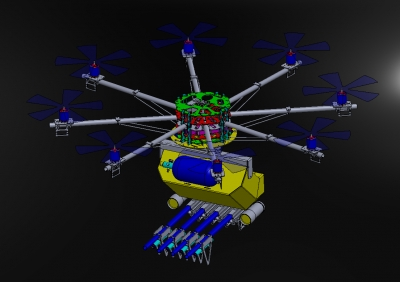 Laborers who risk their jobs and lives to fight for higher wages and better working conditions will soon be facing a even more advanced opponent, after it was revealed that mining companies are preparing for strike actions by shoring up their arsenals with unmanned aircraft.

At least one South African mining company has reportedly purchased twenty-five of the drones, which are said to be weaponized with paintball guns and blinding lasers. The aircraft, capable of shooting 80 pepper balls per second and produced by local arms manufacturer Desert Wolf, sells for $50,000 apiece.

International Trade Union Confederation spokesperson Tim Noonan dismissed the firm’s claims that use of the drone would decrease fatalities that result from labor disputes, calling their adoption “deeply disturbing and repugnant development”.

“We are convinced that any reasonable government will move quickly to stop the deployment of advanced battlefield technology on workers or indeed the public involved in legitimate protests and demonstrations,” Noonan said.

In recent years, hundreds of South African miners have been injured and dozens have been killed, after mine owners called in police forces to quell the labor disturbances. Strikes at gold, diamond and platinum mines throughout the country continue to occur with frequency. 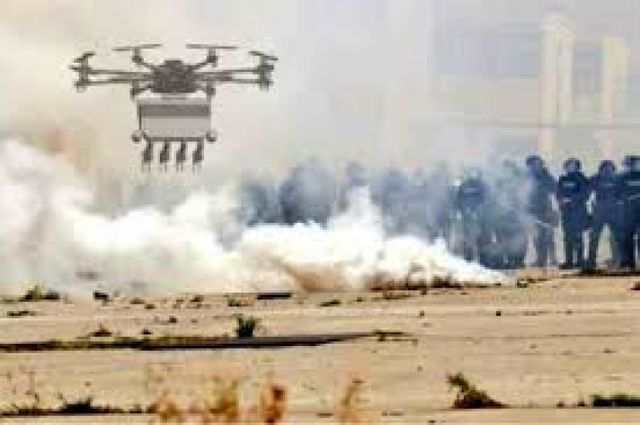 The proliferation of remote-controlled lethal weaponry from the battlefields to the Middle East to the mines of South Africa should be a cause of grave concern to workers’ rights, civil rights and human rights advocates.

Will we soon see these drones policing populations all over the globe, as the science fiction film Robocop predicts?

Will this frightening phenomenon spur on the development of defensive technology or tactics that ordinary citizens can use to do battle with with drones and disable them, as in the feature film Real Steel?

Thus far, the singular response of rights groups to the spread of robot fighter planes seems to be ironic comedy segments, as in these videos from The Onion.

In 2013, rapper Heems of the band Das Racist released a song called “Soup Boys” about doing drugs, picking up women, and the use of drone aircraft against people of color and the racist discourse that legitimizes the use of lethal force against a population half a world away at the touch of a button.